If you’re a golfer who wants to improve his skill, precision pro golf technologies are your best chances at make that happen. Precision Pro Golf is a golf technology company that produces cool stuffs like laser rangefinders and GPS apps that helps golfers figure out how far they are from the green, sand trap, pond or other landmarks. Their devices are user friendly and are available at affordable prices in shops.

Co-founders Clay Hood and Jonah Mytro founded Precision Pro in 2013. The 34-year-old Hood was residing in California and had been a professional golfer for several years, mainly at Virginia and Lexington country clubs. He and his co-founder, Jonah Mytro, who had marketing experience, founded the company after they realized that a fairly low-priced rangefinder would have a wide demand in the golf market. Without inflating prices like most companies did, they sought to disrupt the golf technology industry by offering golfers a moderately priced rangefinder that still had all the necessary features.

A year later, they unveiled their first rangefinder, Precision Pro V400, retailed at $199 and though it wasn’t the market leaders’ technical equality, it was on demand for a long time. Competing goods had been retailing for $300 but they had been able to produce one for just $200. They could sell at cheaper prices as a smaller business, and still have a good result. With shear optimism and by cold calling potential customers, they sold about 300 units before officially launching their product.

After four years, Precision Pro had amassed a gross revenue in the mid-seven figures after producing four new generations of rangefinders, and they showed no sign of slowing down. Year after year, the company continued to grow and it became a norm, suggesting that consumers were anticipating the change.

Their recent product lineup includes the NX7, NX7 Shot, NX7 Pro, and Nexus Rangefinders and is sold through their website, golf courses, Dick’s Sporting Goods website, Amazon, eCommerce sites, retail outlets such as Golf Exchange, and international distributors. They outsource production to a California freelance designer. The produce is manufactured in China.

The company now sells its products in 15 countries internationally, mostly in Europe, Australia and South Africa. With the belief that each customer deserves quality product at an affordable price, they continue to put their customers first. As they improved their technology, their sales continued to rise, and thousands of customers discovered that a quality rangefinder does not have to overturn you.

Their products are easy to handle and it accurately locks on target. It also gives very precise and accurate readings and is greatly recommended for anyone seeking to purchase an affordable, high-quality rangefinder. It’s an excellent tool to keep in your bag. 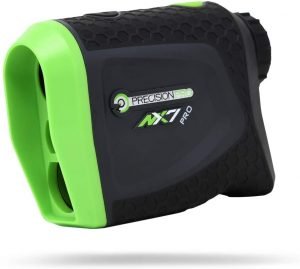