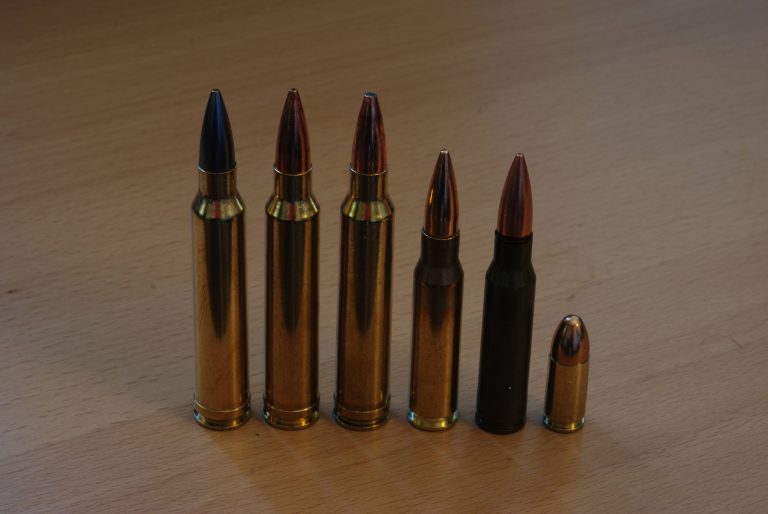 The pressure of the two bullets is where things can get really confusing. The pressure of the calibers is considered to be 50,000 psi for the 7.62 and 62,000 psi for the .308. So it’s obvious one shouldn’t fire a 0.308 cartridge using a rifle built to use 7.62 cartridges. The problem is that this 50,000 psi number is for when using copper units of pressure. This is a basic way to measure pressure and is different from true “psi” or “pounds per square inch”. When adjusting for psi the difference is much smaller as the NATO actually fires at 58,000 psi.

It’s annoying to measure how thick a cartridge case is. It’s best to choose some samples of both kinds of cartridge and weigh them up, then take the average weight from the results. When doing this with the 7.62 and the 0.308 you get an average weight of 163.3 grains for the .308 Winchester and 183.5 grains for 7.62 NATO. This is quite a difference. The thicker walls mean that there is less powder in the bullet which reduces pressure and velocity. The thickness of the 7.62 x51 is something that will come into play with the next comparison point.

The real difference comes from the headspace. Military rifles using 7.62 cartridges tend to have longer chambers. There has to be some slack to allow for reliable operation in machine guns made to be used by most kinds of ammo. The solution to the problem is to increase the length of the chamber headspace. If there’s too much headspace then the cartridge shifts back and forth. Too little headspace and the bolt isn’t able to close or would need to be forced close.

The .308 Winchester has a chamber headspace of between 1.630 and 1.6340 inches while the 7.62 NATO has a headspace between 1.6355 and 1.6405 inches. While the difference isn’t much, the difference in headspace between the rifles themselves is big enough to be an issue. You have to know the headspace of your rifle to understand if it can safely shoot commercial .308 Winchester ammo through a chamber built for a 7.62. Check the chamber size of your rifle with a Go/No-Go headspace gauge.

From a technical standpoint there are some differences between the two, but these differences are mainly found in the rifles used to fire the cartridges and not the cartridges themselves. The 7.62 x 51 mm can be thicker, and the .308 is loaded to a higher pressure, but there isn’t much difference between cartridges outside of this.

If you want to be safe then only use 7.62 cartridges in a 7.62 rifle and .308 cartridges in a .308 rifle. Another risk factor is using 7.62 ammo with a .308 chamber. You may run into long ammo that may not chamber properly in theory. The reality of the situation is that this would be rare to come across. Even though 7.62 ammo can be longer, this is rare to find, so most people have no issue using 7.62 ammo with a .308 chamber rifle.

You shouldn’t have any problem with most modern 7.62 chambers, provided they are cut close to the dimensions of a .308 rifle. Play it safe by making sure just how much headspace you have. Avoid using .308 ammo if your rifle has a lot of headspace.