How To Shim A Rifle Scope

Shooting is a popular sport not just in the United States but around the world. People have developed various reasons for shooting such as hunting, competition, leisure, and self-defense. No matter your cause, there are tools that you need to have to operate a rifle efficiently. One of those is a rifle scope.

While the movies portray attaching a rifle to a scope as simple as slapping it on, this is a very common misconception. A variety of steps need to be taken in order to prepare the rifle. In most cases that includes simply leveling and zeroing in the scope. But there are cases when more work is needed.

One of those cases is when you need to shim your scope in order to get a bullet to go where you need it. The most common need to shim a scope is when you are in the field and the scope has been knocked out of alignment. This could happen from a drop, an impact, or other such damage.

Those who shoot air guns will also occasionally find the need to shim a scope in order to adjust for the variable trajectory of pellets. Should your pellet rifle have what is known as hop up which causes the pellet to go up before it goes down. 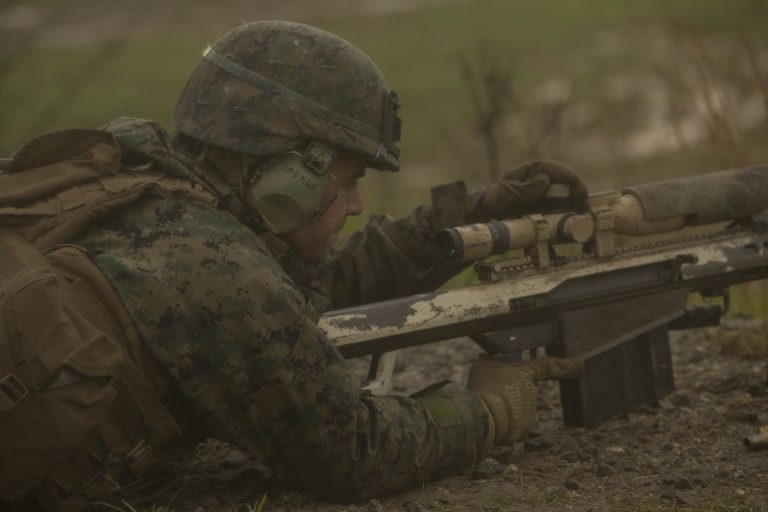 Before you start the process, you will want to have a few tools. Luckily, you should have these tools in the field anyways. Here is what you will need:

What To Use As A Shim?

A shim can take the form of any material that is thin and sturdy. Metal washers are the best material, but you can use anything similar. Pop can tops, business cards, and any other form of wedge or spacer. It just needs to be as durable as possible and the ability to stay in place.

Many of us also have black electrical tape or another form of tape on us. A little bit of this can be used as a shim. Be aware that layers of tape can be pushed in though, make sure that the scope will not move at all once the shim has been applied.

Almost anything can be used as a shim in an emergency situation. However, if you can afford to pause for a bit and think it through, you should do so. You don’t want a shim that isn’t flat that could apply undo pressure on any part of the scope. Many people also prefer to have a shim that won’t scratch their scope but that is purely cosmetic in most cases.

Shimming is an emergency solution. Do not shim your rifle if you have any other option to get your scope on target. As soon as you can, diagnose the problem. Often times the shim can be replaced with new scope rings or by fixing the attachment points on the rifle. In extreme cases you might need a new scope.

Apply your shims one or two at a time at most and do not leave them there for a long time. Shims can damage the scope itself. The more pressure exerted on the scope, the greater the chance of damage.

How To Shim Your Scope

Step One: Find A Shim

Professional shooters will keep a few washers and other parts with them when they go out shooting in case something goes wrong. If you don’t have these, you will need to analyze what you have on you. Items like business cards and pop can tops will not fit in a scope ring as they are. They should be trimmed down to fit the ring as best as possible. One business card can also be used to form multiple shims with one card.

Properly fitting a shim to your rifles scope will help to prevent both cosmetic and actual damage to the scope.

As a quick reference point, a single pop can top will add three to four inches per 100 yards that you are shooting at. A business card or similar paper will add a little less. This is another reason that you want to add shims slowly as you can quickly over compensate. Especially if you are shooting at long distances.

Take the scope from the scope rings as carefully as possible. If you avoid knocking the windage and elevation, there will likely be less to do in the last step. In addition to that, if you are removing the scope in the field, you want to make sure that you don’t lose any parts.

Leave the bottom rings attached to the rifle so that you don’t need to adjust them further. But also make sure to remove the bolt so that you don’t have an accident during the process. It will also allow you to look down the barrel to help ensure that you are on target.

After you determine whether you need to raise the front or rear of the scope, you want to put the shims in place. Start with one at a time. Again, we are trying to prevent damage to the rifle and one shim adjusts the rifle a large amount as is.

Step Four: Put The Scope Back In Place

However, while you want to be careful with the tightening process you want to make sure that the scope is tight. If you don’t properly tighten the scope it will move around when you fire. Even a little looseness will start to show after a few shots.

Step Five: Ensure That Your Scope Is Level

If you brought a level in your bag like is best practice, you will want to check to make sure that the scope is level once reattached. The scope should sit completely level and even on the shim and the rings. Any wiggle in the scope should be addressed by either altering the shim or adjusting how you tightened the scope down.

Now that everything with the scope has been adjusted, it is time to put the bolt back in place. After the bolt is in place you want to run the bolt a few times with no ammunition in the gun. Perform a full functions check to ensure that everything is working as needed.

Step Seven: Zero Your Sight Back In

The alteration of your scope by adding shims means that your zero will likely be gone. Fire three shots into a target or known area and then measure them from center. Adjust the windage and elevation as needed and fire again.

If you are able to zero your sight in, your shim was done properly. It might take several times for you to zero in your sight as a shimmed scope can adjust your shot by inches depending on how much you shimmed it.

Don’t worry if your shimming didn’t fully correct the issue. If you are still not able to zero in your scope, you will want to start back at step one and apply more shims. The process might take a while but being patient will help you to ensure that you get your rifle on target without causing any damage to the scope.

Knowing how to shim your rifle is important. It can help you in situations where you don’t have another option to get your shots on target. You might also find it helpful if you are an air gun shooter. Just remember to only shim your scope when it is absolutely needed. We hope that this article is able to save your shooting trip or your life and that you take it to heart. You never know when you might need it.